Wow, so much as changed since I wrote on this old blog.  First, I took a MUCH NEEDED break from blogging. It was too much. In the past years, I've experienced an insane amount of change and upheaval and decision making and I couldn't blog. It just wasn't happening. I know that I have lost much of my readership but maybe that's ok. I'm reinventing myself. Again. It's a new year and it's time to make some changes. I guess that means bringing back the blog and maybe finding a new place in the blogging world.

So, for my inaugural post of 2017,  I want to share projects I'm starting.  I have joined two challenges this year. The first is to make a temperature blanket. It's a cool concept that involves knitting which I love. Everyday, you knit a row of your blanket, based on a colour assigned to the temperature outside. So, I created a list of temperatures and corresponding colours. I've knit the first row so far, but today I can add another. Yesterday was Dark Blue, indicative of weather that wasn't so bad (-19 C) at the time I checked.  Today, it's black... it's bad out. (-33 C).

Secondly, I've decided to create a stitch journal of the year. The object is to stitch at least 1 stitch everyday for a year, and write a sentence about that stitching.

Day 1: I stitched a heart to start the new year. Love at the end is all that matters. 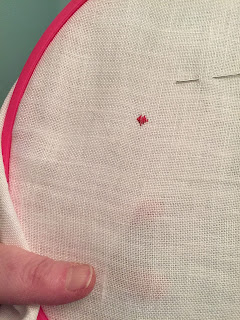 Day 2: I feel optimism despite the cold and it being the last day of holidays. Gentle blue stars to match my optimistic but somewhat sad outlook. I go back to work tomorrow and I've hardly done anything over the holidays to support myself in working. I needed the break. I have today to plan and mark like crazy. It's ok although I would rather clean the oven than work. Haha, yeah. It's that bad today. 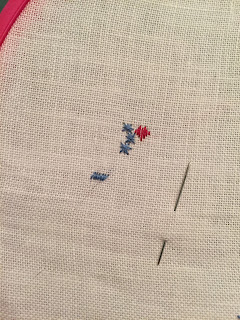 Pictures are coming for the temperature blanket. I promise but there's not much to see yet.
#1yearofstitches
#temperatureblanket

I attended my first every Saskatoon Modern Quilt Guild meeting yesterday!  They gave me free fabric, so I am hooked! Seriously though, a member had a box of Batik material and was giving it away so I walked away with a stack of lovely, yummy batiks... The way to my heart these days... 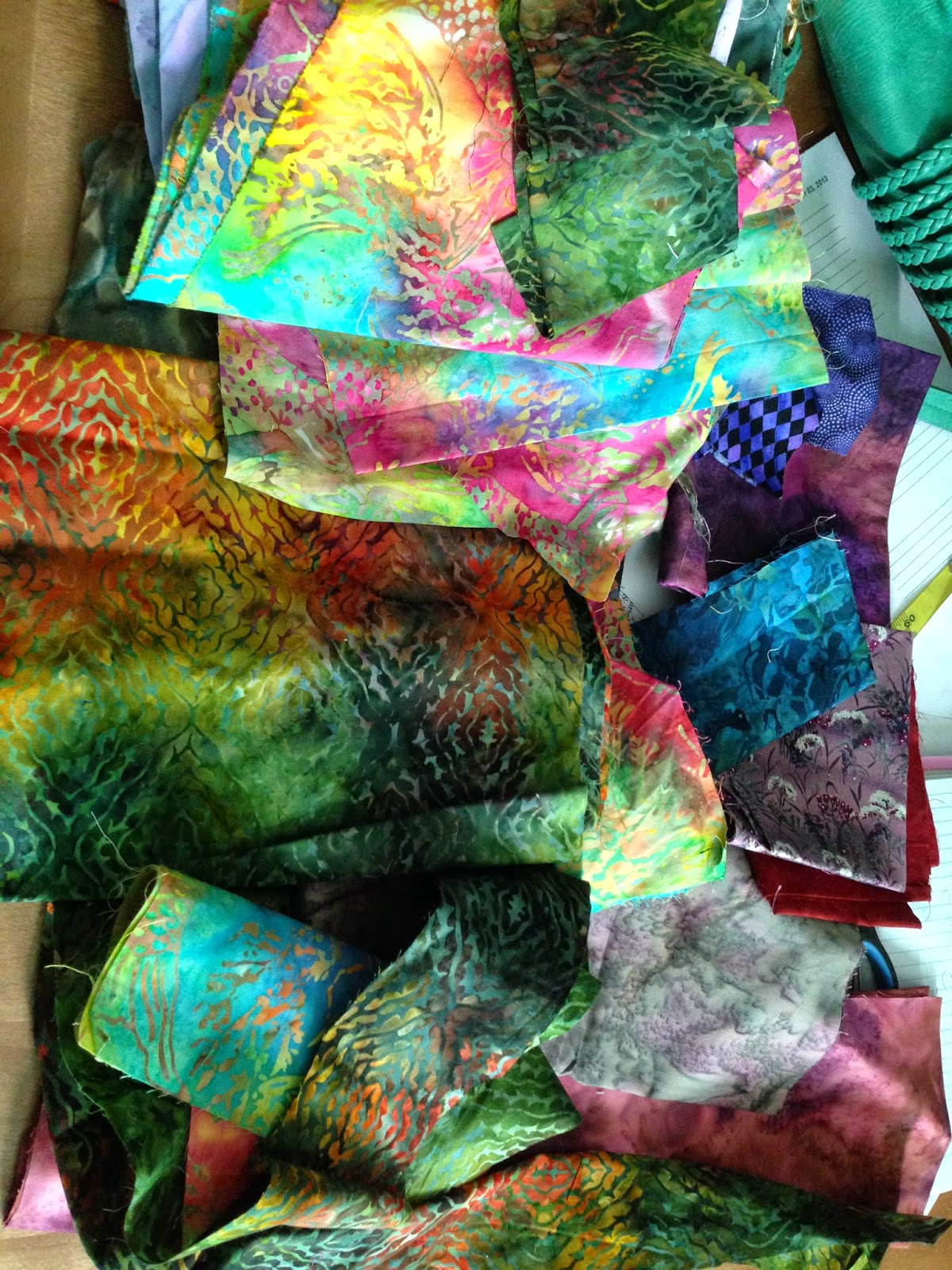 Otherwise, I am working on this fun, scrappy String quilt at the moment. I don't get many moments to sew between the dogs and the cats (and I promise a post updating life with them next!) but when I do, this is sewing up fast and furious and I don't think it'll be long before it's done.  I am not sure I want to write a tutorial on how to make these as there are lots of great posts out there, but if you are thinking about it, do your homework (read a blog post or two to learn how!) and jump in! It's my first attempt at working with paper foundations and it's fun! 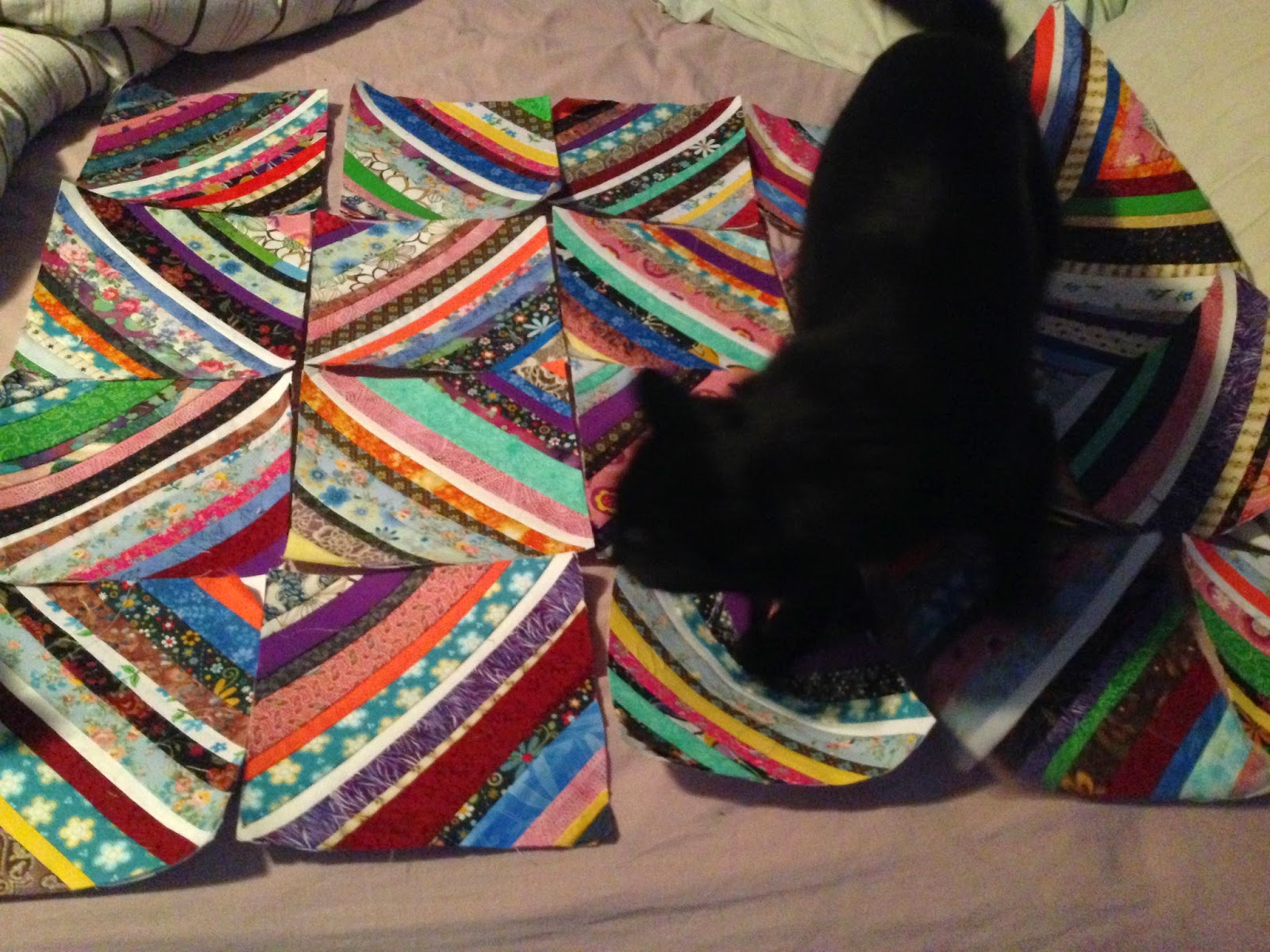 Ryder was helping me show off my blocks! 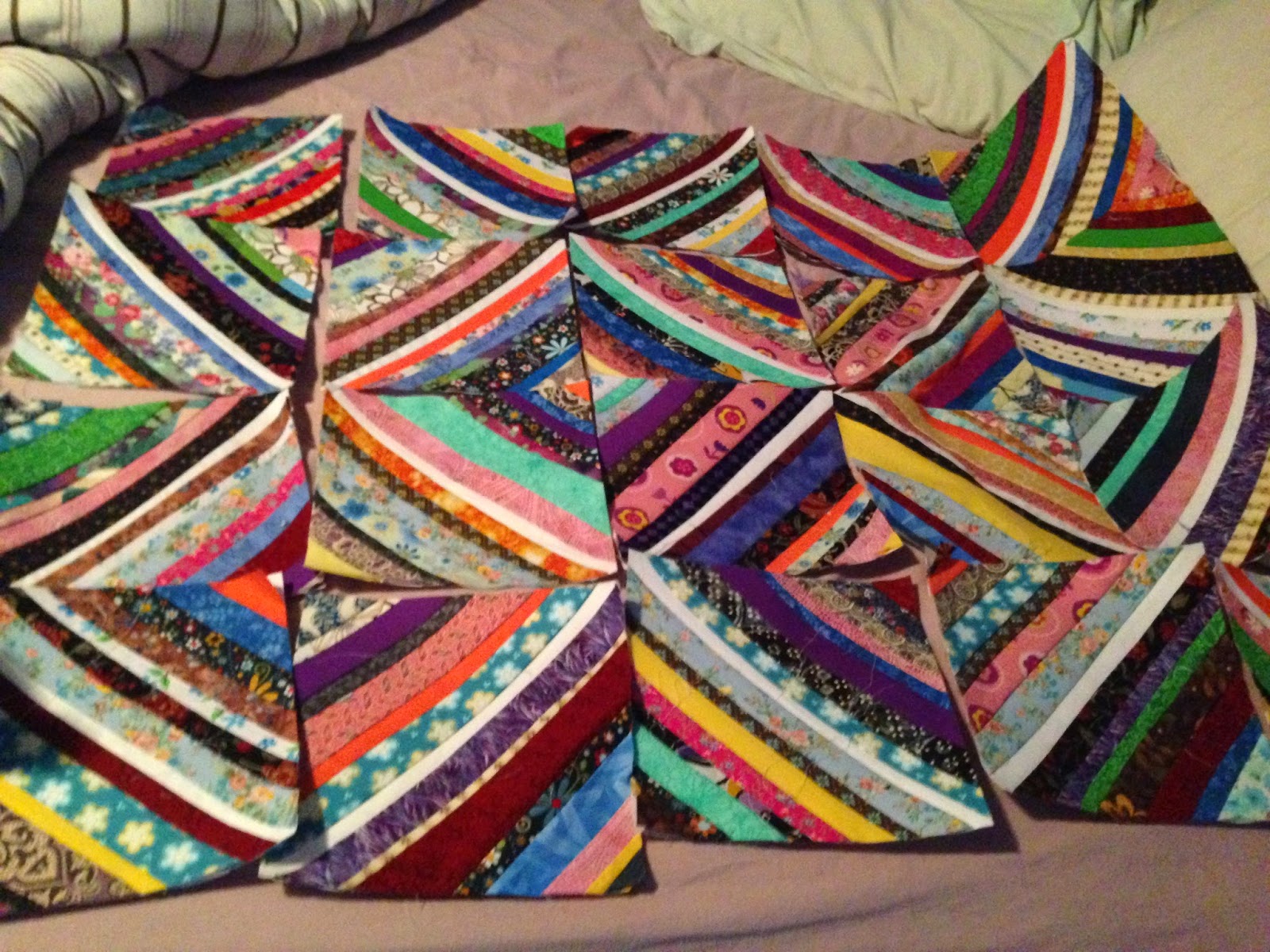 Here's what I have so far. I need MORE obviously, then I need to sew them together!  So far to go until it's a completed quilt but it's coming along!

Posted by Unknown at 8:35 AM No comments:

I've been quilting... and I love it! I've become quite fascinated by colour and fabric and how it all works together to create something functional, useful and lovely.  I've worked on MANY projects over the summer, but I thought I would share one with you now... 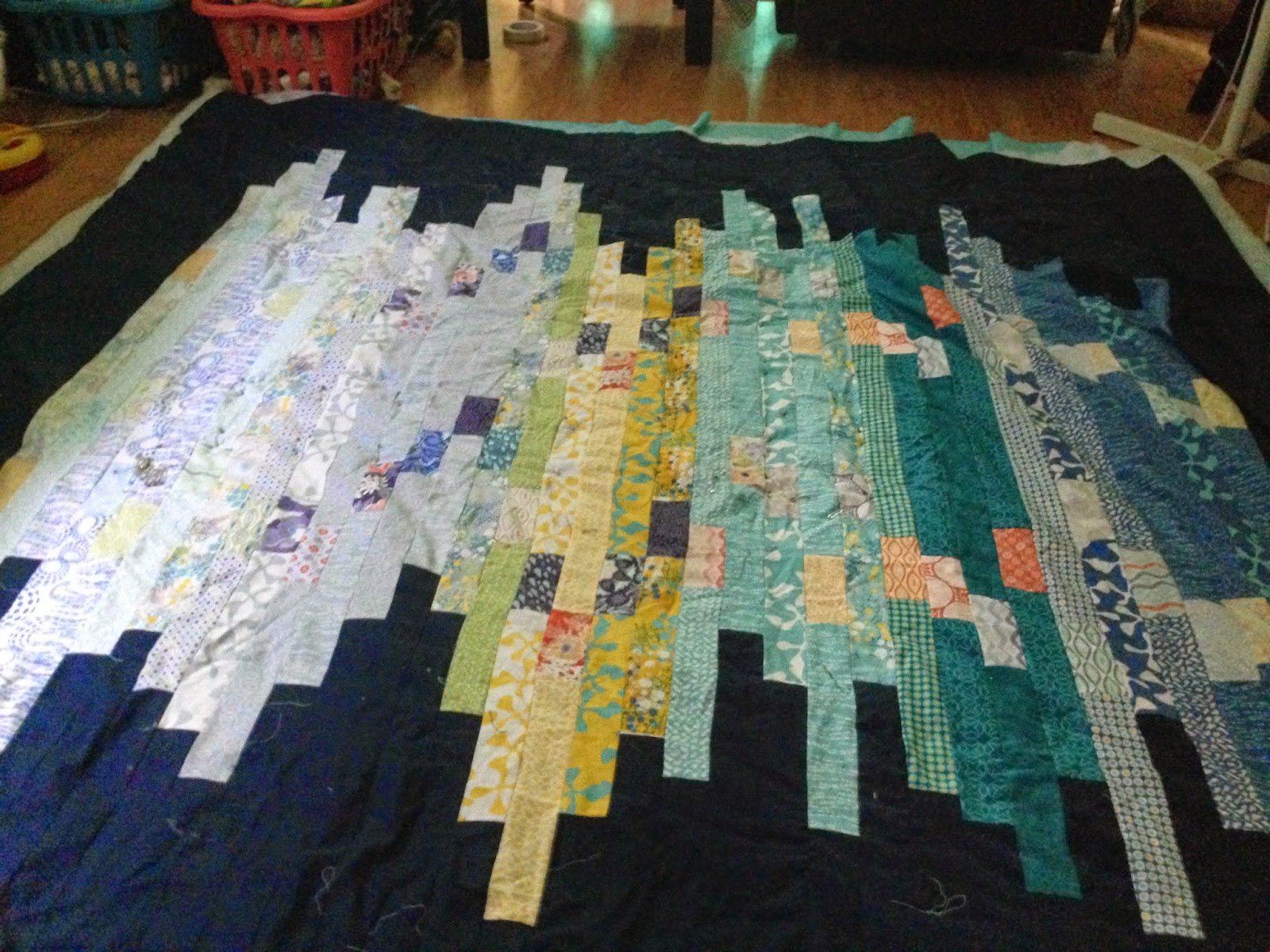 This is made from Tula Pink's Shoreline pattern.  I couldn't get her original fabrics that were used when she created it. But, I do like what I ended up with. 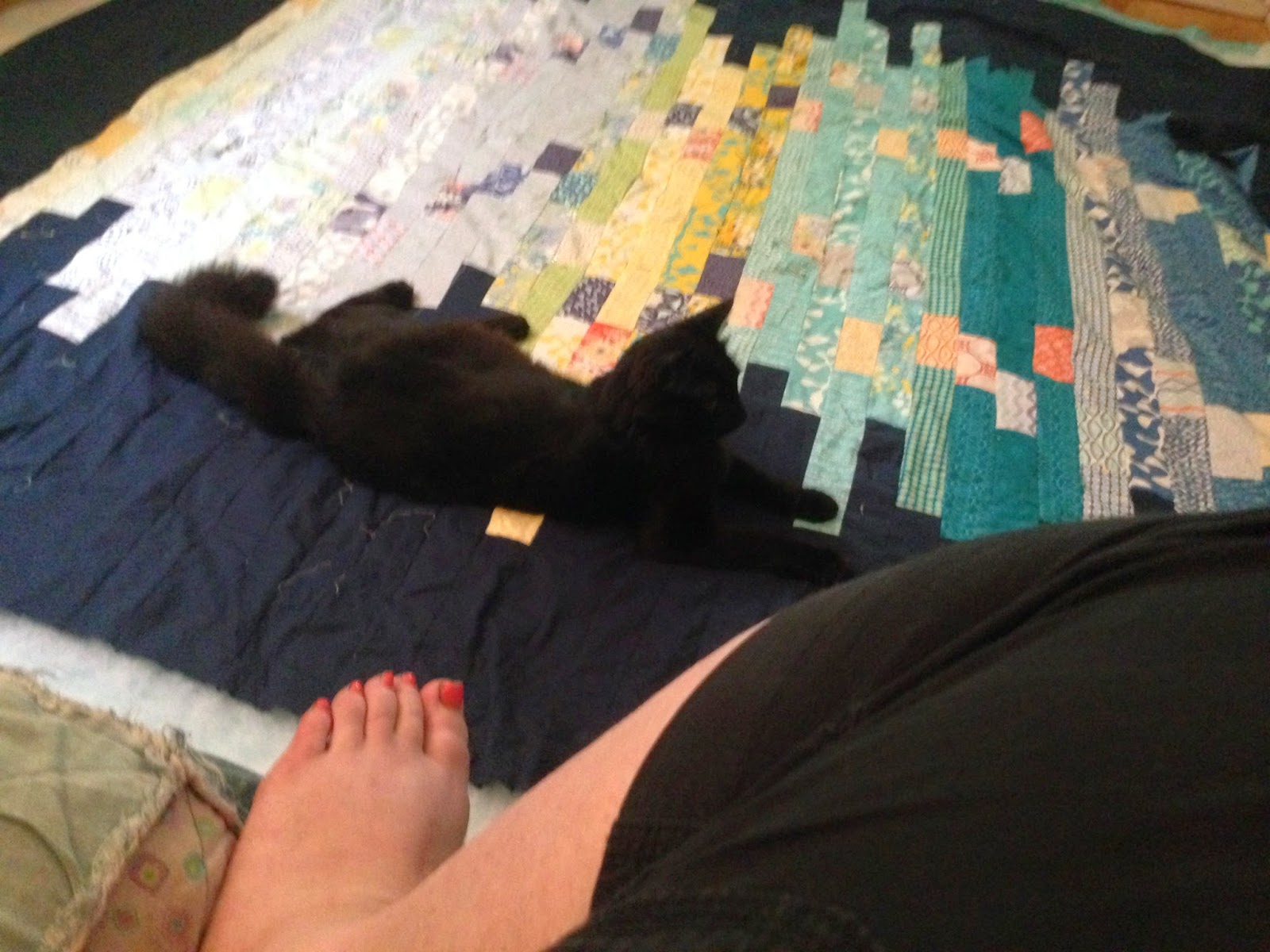 Ryder cat helped me work on sandwiching the quilt. Let me tell you, it's not easy pinning a quilt when you have cats lying on it.

Anyway, I am in process of free motion quilting this- my first attempt. It's going SLOWLY and I am not that confident with it yet. But, it's coming.  I love this quilt- it will be used on my bed I believe.

I've missed this old blog and it's good to be back!

I will start with she is going to be just fine!  But, it was a scary situation- far worse than I imagined when I got up yesterday morning.  I called my friend who told me that the symptoms were suspicious and confirmed what I was worried about- Sophie should go to the vet.  Unfortunately for me, I was already at work and as a teacher it's not easy to drop everything and run back to the city to take her. But, Rebecca drove in, picked Sophie up and dropped her off for me; thank God!

By the time Sophie got to the vet she was majorly dehydrated, she was starting to shake and her heart rate was very elevated.  She couldn't keep anything down, not even water. So, they quickly checked her out and started an IV to get her fluids back up.  My vet decided an Xray was in order because  all signs pointed to a blockage somewhere in her stomach/GI tract/Intestines.  The Xray showed the possibility something was stuck in her tummy so they did an ultrasound. This showed for sure there was something but they couldn't tell what.

Next step? Surgery.  Poor Sophie as it turns out had eaten a freezer bag that was lodged between her stomach and bowels. It required 2 incisions to get the bag out and make sure that the blockage was cleared. Poor baby!  My vet decided to keep her overnight on IV fluids to make sure she was no longer dehydrated and to make sure that she was ok, post surgery.  I don't have my Sophiedog back yet but apparently she is looking much, much happier this morning. She is wagging her tail and it sounds like my girlie is on the way to recovery.

I learned SO MUCH from this experience-- if your labrador looks like she isn't feeling well, she isn't. My vet confirmed my worst fears; Sophie was in excruciating pain but wouldn't show it.And, if she won't eat, that is BAD! Sophie started down this path by throwing up multiple times but we turned the corner when she refused to eat. It's serious. Also, I knew her tummy was sore- I could feel it. Don't question it; if you think you need the vet, you need the vet.  8 hours would have meant a different outcome for Sophie because her heart rate was already so elevated. She was in danger of her organs starting to give out in the process.  I am scared to think what would have happened if I had let this go and decided to wait it out and see if she would perk up. Soph would be gone if I had done this.

Another lesson learned: the deep freeze will be moved to a place where Sophie is not able to access it as easily as she has been able to in the past. UGH!

Sophie is going to be just fine now- likely it's a 4 week recovery from the surgery until she is really back to normal but she will be fine. I will be fine eventually; this was an incredibly traumatic experience for me, one that I won't easily forget or shake off. It's not even fully real to me yet because I don't have my dog back. But, it will be and I know what to look for, heaven forbid I go down this path again.
Posted by Unknown at 2:02 PM 2 comments:

It's been nearly 7 years since I learned a dog named Sophie was going to join my little family. And, it's been quite the journey throughout her life, I must admit.

Sophie got sick yesterday and I decided this morning to send her to the vet. I have been through many episodes with her over time-- lots and lots of times of her throwing up but she crossed the line this morning and refused to eat. That's a scary place for Sophie. So, I originally was going to wait the day but I talked with a friend who said "no!  I will take her for you now!"  I fearfully but gratefully accepted. So, Sophie is at the vet right now awaiting X-rays to see if she has an obstruction. And I am at work, feeling anxious  and worried and nervous. And sad, so incredibly sad!  She is not herself at all and it's heartbreaking to see how scrawny she got so quickly and how sad she is looking herself.

She just isn't feeling well and I know it.

It's hard when our fur babies aren't well and we don't know what is wrong. It's even worse that she is at the vet and I am not.

Please, send happy, healing thoughts for my special girl Sophie. She needs it!! 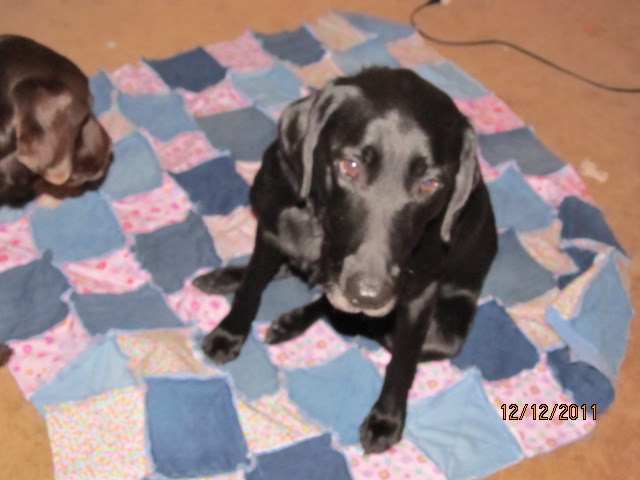 Sophie a couple years ago helping me quilt. Love this girl so much!

Cross-Stitch, yet another hobby.

I love to cross-stitch but haven't picked any up for years. I have lately been into knitting like a crazy fool and I have also been quilting. I am working on my first "real" quilt which I am not nearly finished but have set a goal to be done in the next 4 months.  So, that has been a focus.

However, sometimes change is good!  So, I picked up an old project that I love and feel very much re-energized to work on... especially with the advent of cats in my home. Ophelia is my personal Maggie!

Anyway, here is a photo of where I am at. 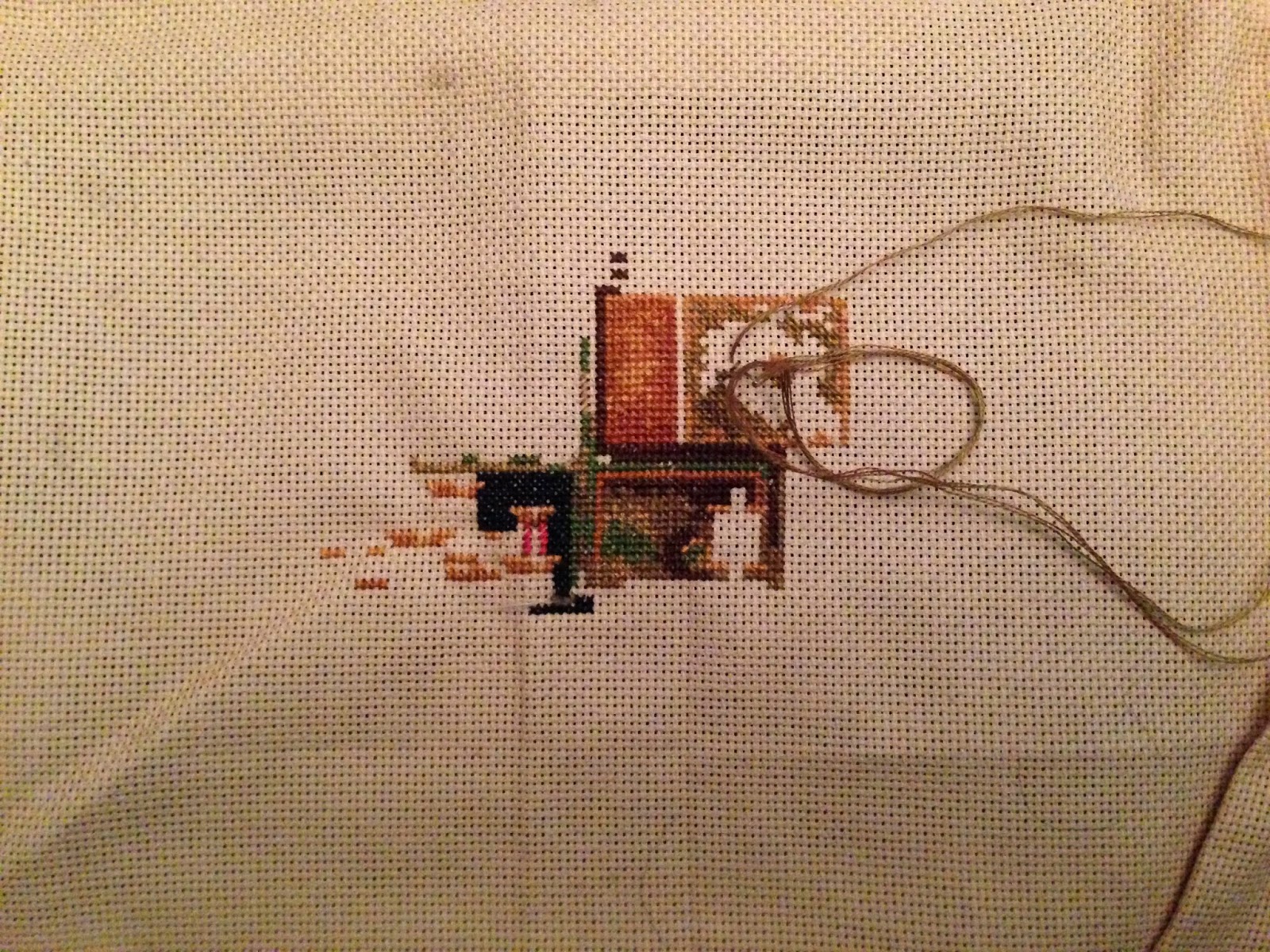 Not far into the project at all!!

However, when its finished, this is what it should look like.  This is the link to the dimensions kit. I personally do NOT like using Dimensions kits and this one really is no different except that I love this Charles Wysocki print and I really wanted to stitch it as a tribute to all those happy but bratty cats who love craft and sewing rooms.
Posted by Unknown at 8:12 AM No comments:

I have been sick this week with some sort of H1N1 viral flu, maybe, or perhaps a viral pneumonia. The doctors were unclear with me but what I DO know is that I am SICK! I have been coughing up a lung and napping for hours everday-- it's been going on for a week already and I have been starting to get a little bored of the nap, pet kitten, play with puppy, nap, repeat, repeat routine.

So, I have gotten busy and decided that I NEED to finish this baby gift for a dear friend.... It's not quite big enough yet and I have to admit I have fumbled the pattern in a few places, but generally speaking, I am very pleased with the results! I also splurged and used a gorgeous Cascade Wool...  check it out, if you are into fancy wools to knit with... Cascade Yarn Superwash Paint.  I used the tropical seas colour scheme because I think it's an interesting set of bright, vibrant colours for a baby. No pastels here!  Hope she agrees with my choice!!


Can't wait to show off the finished product at the end of this!
Posted by Unknown at 11:32 AM No comments: 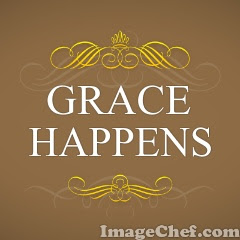 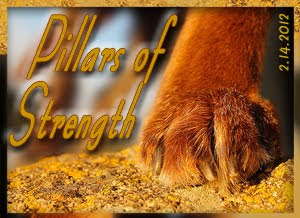